“Wear your learning like a watch and do not pull it out merely to show you have it. If you are asked the time, tell it, but do not proclaim it hourly unasked.”
The Wit and Wisdom of Lord Chesterfield

Philip Dormer Stanhope, 4th Earl of Chesterfield (1694 – 1773) was appointed Lord of the Bedchamber to the Prince of Wales, George II; and is known as the man who gave us the Chesterfield sofa.

Speak softly, listen often, for wisdom is an acquired thing.

Though you do not ask, I will give one of the many wise things Lord Chesterfield did, and no more.

In the 1760s, Chesterfield gave his critique of Greenville’s Stamp Act 1765 passed by the British parliament over the protests of the American colonies. In a letter to the Duke of Newcastle, Chesterfield noted the law’s absurdity both because it could not be properly enforced, but, if effective, the revenue generated would be no more than a tenth of the loss in reduced trade with the American colonies.

Is there a difference between a Chesterfield sofa and a Tuxedo? 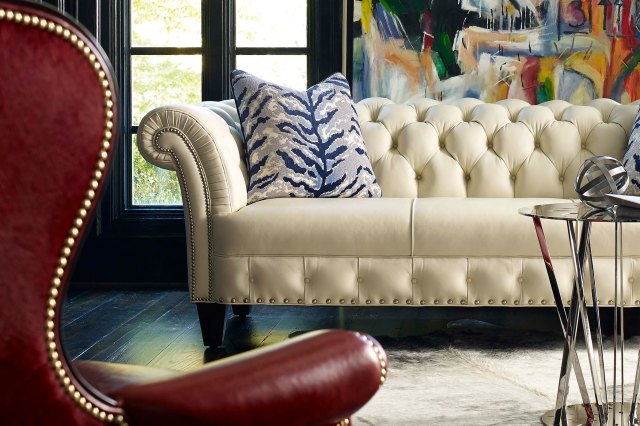 Often the two are confused. But, the luxurious Chesterfield sofa is usually noted by its beefy rolled arm that sometimes curves out from the sofa. Like the Tuxedo it has the same arm and back height. The Tuxedo’s straight arm is perpendicular to the floor, and it is usually, but not always a little cleaner, a little slimmer. Both are known for their button tufted backs.

The lore of the Chesterfield is that it was invented when the fourth Earl of Chesterfield, Philip Stanhope (1694-1773), commissioned a similar sofa in the mid-18th century. The fullness of the sofa, the labor intensive tufting suggested to anyone that saw the Chesterfield that it was only for the upper classes. So popular among the Lords of England it became standard in London’s elite gentleman’s clubs.

The Tuxedo appeared in the 20th century at about the time of the Great Gatsby. It takes its name from the village of Tuxedo Park in upstate New York, yes, the same place that inspired the formal suit that once was de rigueur for banquets and still appears at the Oscars each year. Notable residents of upscale Tuxedo Park included Emily Post, the grand dame of good manners. Its clean lines and simple shape, proclaimed that modernism was on the way.