The American craftsman and woman have been around a long time.

And for those who appreciate the beauty of wood, the quality of work, and the value of good design, the products that American craftsmen and women make will continue to be around for a long, long time.

In the eastern Panhandle of West Virginia, in the Appalachian Mountains, near the Shenandoah River lies Berkley Springs, population 601, home to Gat Creek Furniture, whose craftsman and women custom build furniture to order. The furniture is made of cherry, ash, maple and walnut, locally resourced in the Appalachian Mountains and sustainably harvested. 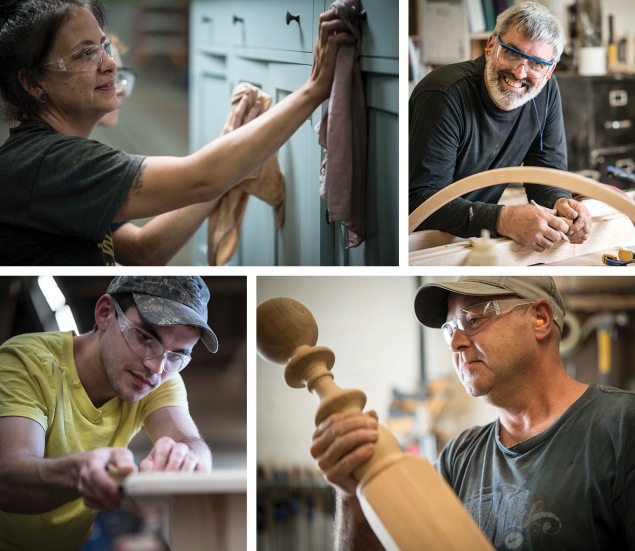 See the beauty of Gat Creek Furniture, available in Kansas exclusively at Traditions Home in Wichita and Overland Park.

Pardon me if I digress

Sleep, my child, and peace attend thee, all through the night…

Many was the night when Dylan Thomas’ mother, a simple and religious woman, sang this tune to her child as he drifted off to sleep. The original Welsh lyrics began, “Holl amrantau’r sêr ddywedant, Ar hyd y nos.” Translated to English, “All the stars’ twinkles say. All through the night.”

I mention all this because I am of Welsh and English extraction, because I love the tune, I love the lyrics, the poet is in my soul, and because, like Dylan Thomas, my mother sang it to me.

Visions of fright turn to delight

Before there were night lights to keep a child company at bed time, the pale moonlight shining through the window brought comfort. Outside my room, the moon hung low over the blue Appalachian mountains.  Back then we slept with the window open, listening to the gentle rustle of the breeze through the trees, whispering the word, “Sleep.” But, the silence was broken by the screech of the cat, the bark of a dog, or the mournful cry of the night owl.

A frightened child, unable to sleep, was soothed by its mother’s gentle voice, all through the night…

Who is Gat Creek?

The name behind Gat Creek is Gaston Caperton, Gat to his family and friends.

Where is Gat Creek?

Gat’s story is that growing up in West Virginia, he and his family lived in home in a forested valley surrounded by mountains. Like most kids, Gat and his brother spent their days playing along a nearby creek that wound its way through the valley. Being a year older and bigger and taller than his brother, Gat saw the creek first and proclaimed it his by way of conquest. Gat’s brother protested to his parents, who gave into the fatigue of chasing two boys under the age of five, finally relenting in Gat’s favor,

The name stuck and now appears on maps, along with a road of the same name.

What is Gat Creek?

Almost 30 years later, Gat Caperton fell in love with a local furniture company in Berkley Springs that built antique reproductions using local craftsmen and women as well as Mennonites and Amish workers from Pennsylvania and Ohio. The company was Tom Seely.

Gat was interested both because it was a local West Virginia company and because Gat was in love with the idea of designing furniture. A background in business and finance helped seal the deal.

“I am fascinated by people who buy troubled businesses, then fix them and make them profitable,” Gat would later say.

He bought the company and eventually gave it the name it now proudly carries. Twenty years later, Gat Creek is still American made, using solid wood cherry, maple, and ash. And now sells through a network of 200 national retailers from coast to coast.

One of these retailers is Tradition Home. We are proud to say that we were the first Tom Seely and Gat Creek retailer west of the Mississippi, having earned our spurs working with May and Bud Ledtke at Village Antiques in Vienna, Virginia.

It is interesting to say that during World War II, Tom Seely served with the Flying Tigers in Kunming, China; and Bud Ledtke was a B-17 pilot with the Eighth Air Force flying out of England, where he met his future wife, May, who work alongside General Curtis LeMay.

Gat Caperton is named for his father Gaston Caperton, two time governor of the state of West Virginia. The unusual last name traces its origins back to Lincolnshire, England and before that to the bailiwick of Caux in Normandy, France. It is said that the Caperton family was descended from Le Cappere of Ayncourt (Aincourt), and was granted lands by William the Conqueror, their liege Lord, for their prowess at the Battle of Hastings in 1066.